Showing off the motherboard

Patricio is a student at Santa Monica High School in Los Angeles. Read about how he and Santa Monica’s Team Marine converted an old Beetle into an electric car.

Converting the 1971 Volkswagen Super Beetle (also known as “Volts Wattson”) to run on electricity was an interesting and unforgettable three-year experience. I started the project without a clue of the inner workings of electric cars. All I had going for me was the thirst for technical knowledge and the need to improve our current global situation.

I first realized how much of an impact human beings have on the environment when I was studying abroad in Mexico City. On my way to school, I would see plastic wrappers and bags lining the corners of the streets. I could smell the stench of what once was a great river, now a dried up sewer. I could not believe that people could disrespect their homes like this. Due to this experience I began looking at ways I could join my passion for engineering with a sustainable lifestyle. Luckily I found Team Marine at Santa Monica High school, which allowed me to do just that with their electric car conversion project.

When I joined the project, Team Marine had already had a year of work on the car. They had taken out all the combustion parts, such as the motor gas tank and tail pipe, and bought the AC 50 Curtis controller and motor. The first year that I was part of the project we bought the minor accessories like the potentiometer box, the DC-DC converter and so on. This purchase was after tons of research and asking a lot of questions. 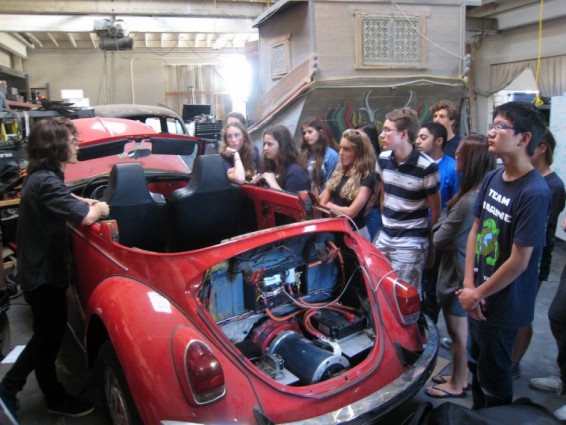 Sharing the process with other Team Marine members

One of my favorite parts of the whole conversion process was figuring out how we could install all the parts while keeping everything visible and safe. A huge part of the project’s purpose is to take the car to different schools and events in order to spread awareness of climate change, ocean acidification and some of the solutions to these problems. So, as one could imagine, the layout of the components was a big variable to the project’s success.

By the second year with the project, we had everything except for the most important part: the batteries. This was a problem because we had limited money and large ambitions. Our goal for the car was to be able to meet industrial standards, which meant having a range of at least 100 miles. We could only achieve this by using the best batteries on the market. With an energy density unlike any other, the lithium ion battery was what we needed for the conversion to meet its goal.

The project would have been dormant if it wasn’t for our generous intellectual and monetary sponsors, who allowed us to take the car to the next level. Left Coast Electric, Wells Fargo, Alliance for Climate Education (ACE), Trexa, GastoElectric, and Teen Nick helped us fulfill our goal of creating a lesson plan on wheels. Thanks to these sponsors we were able to buy and install the 96 LiFeMnPO4 cells and all the other battery related components that we needed to finish the project!

The installation of the batteries was done mostly during the third year. This was largely possible thanks to Reverend Gadget from Left Coast Electric, who allowed us to use his shop and tools and mentored us through a potentially dangerous aspect of the conversion process.

Presently we have been waiting on a few BMS (battery management system) boards and tweaking the mechanical aspect of the car in order to make it fully functional. Although there are a few things we need to work on, the car runs and we have been taking it to various events throughout Los Angeles. We still have to test out the car in order to get a precise value of the range and various other parameters. In the future, the team and I hope this project will not only educate the community about the pressing issues facing our environment, but also inspire people everywhere to start thinking sustainably and responsibly about their lives and those around them. 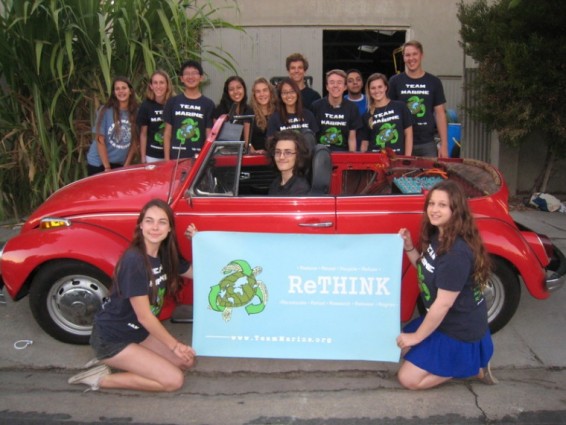 Patricio in the driver’s seat with Team Marine

The Climate Emergency is Here.

Since the summer of 2021, we’ve watched elected leaders at every level grapple with the reality of the climate emergency. Communities, businesses, homes and individuals are suffering at the hand of climate inaction and our elected leaders have the ability to change that. It’s time for our elected officials to meet the urgency of the moment and declare climate emergencies!

Aryaana Khan (she/they) is a 20-year-old youth climate organizer located in New York City. She has been a part of the Youth Fundraising Advisory Board (YFAB) and a Senior Fellow at ACE, and is currently a Biologist in the making at the City College of New York. As she prepares to attend COP26 with ACE, Aryaana has shared some thoughts around the conference and the outcomes she is hoping for.

The consequences of climate change are affecting us everyday. We are now experiencing hotter heat waves, deadlier hurricane seasons, rivers drying up, air pollution destroying our health, and so much more. It’s time to sound the alarm and declare a national climate emergency. We need to raise our voices and let our government officials know that its #NowOrNever.