In the fall of 2013, ACE and its partners in GREENevada, with support from the Washoe County Health District Air Quality Management Division (AQMD), launched a campaign called Idle-Free Schools for Washoe County, the county surrounding Reno, Nevada. GREENevada is a coalition of nine non-profits and agencies providing a collaborative approach to school sustainability through comprehensive environmental education and leadership.

What is idling? Idling is any time your car’s engine is running, but you’re not moving. In the drive-through, at a red light and in this case: sitting outside a school with the engine on.

Why is idling bad? Three reasons:

Health: Engine idling creates air pollution, which is especially bad for kids. Kids’ lungs are still developing, they breathe faster and are closer to tailpipes than adults. Breathing air pollution can aggravate asthma and even cause cancer. No bueno.

Money: Idling your engine increases car maintenance, wastes gas and burns a hole in your pocket! What a waste. Did you know when you’re idling you get ZERO miles per hour? Ouch. 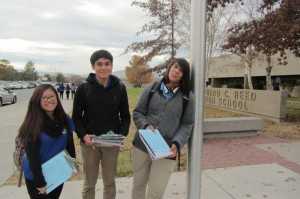 Here’s how it works:

Schools start by monitoring how much idling is currently happening outside their schools when school gets out. Once they know this and established a baseline, schools’ Action Teams (green clubs) kick off an awareness campaign about Idle Free. This can be anything from making a public service announcement video (PSA) to making posters and handing out yummy baked goods to students and parents who pledge to go Idle Free.

This doesn’t even include the super-cool stickers, bumper stickers and flyers that students are handing out. Big props to Aidan Reilly at Washoe Innovations High for designing the logo and huge thanks to the Washoe County Health District AQMD for supporting their purchase and the program.

Once the school gets why idling’s no good, students go out again to monitor how much idling they’ve reduced. The school that drops its idling by the greatest percentage wins. (But everyone wins, really, if there’s less air pollution and climate change and more money in your pocket.)

The Supreme Court’s decision to gut the EPA’s ability to regulate carbon pollution will harm the lives and wellbeing of all Americans.

The Youth Think Climate (YTC) Magazine is a digital, youth-led publication dedicated to showcasing the thoughts and experiences of youth on the climate crisis through various artistic mediums. This magazine was formed to build a community within the climate movement so that young people have a space to self-express and develop the belief that they can make change. By placing emphasis on storytelling and personal narratives, we bring in fresh, global perspectives and encourage youth to reflect on how the climate crisis affects them on a personal level.

Jorge Alvarez is a 23-year-old recent first-generation college graduate, mental health advocate, digital strategist, and content creator who combines his appreciation for creative storytelling and video to inspire action, empower others, and build community. Through sharing his lived experiences and the lessons learned along the way, Jorge’s content not only destigmatizes mental health but cultivates space for collective reflection, unlearning limiting beliefs, and generational healing through breaking cycles.