Step 1: Select a good, healthy planet where life is already thriving. (Earth is the only one we know of so far, so we’ll start here.) Mix up a healthy atmosphere of 3 parts nitrogen, 1 part oxygen and just a touch of greenhouse gases. (These are CO2, water vapor, methane and few others and can be found in the air of any well-stocked kitchen.) 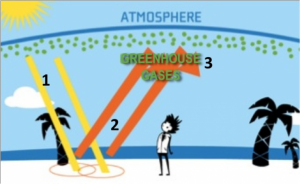 The greenhouse effect in action: (1) Sunlight warms up Earth’s surface. (2) Earth puts out heat. (3) Greenhouse gases trap the heat inside our atmosphere.

Note: The greenhouse effect is highly delicious. Life on Earth would not be possible without it. It keeps Earth’s temperature at a tasteful ~59ºF instead of a frigid 0ºF– unsuitable for proper culinary activities!

Step 3: Now shop around for a good source of energy to meet people’s growing demands: transportation, electricity, heat, cooling, AC, producing all that STUFF we use.

Voila! Add fossil fuels – oil, coal and natural gas. While these ingredients were formerly cheap and abundant, prices are soaring and supply is running low. Look for ingredients in war-torn unstable undemocratic societies.

Step 4: Burn fossil fuels to taste. Now we can drive our cars and trucks, produce electricity and make all our stuff.

Note: Don’t worry if smog starts to fill your kitchen during this step. This is a normal side effect of burning fossil fuels.

Step 5: Repeat burning fossil fuels for next 250 years, burning more every year than you did the year before, or until atmosphere is golden brown.

Step 6: Taste the gases coming out of your tailpipe or smokestack. It’s CO2! (along with some other dirty stuff like sulfur dioxide, hydrocarbons and nitrogen oxides that’s not so good for your lungs, either)

Step 7: Measure the level of CO2 in the atmosphere now. It should have increased from 280 ppm (that’s parts per million) to about 390 ppm—an earth-shaking rise of nearly 40%. That’s like putting an extra scoop of baking soda into the mix. It’s small, but it packs a big punch!

You’ve now baked up a hot batch of climate change, fresh from the oven. Sprinkle with cinnamon and serve.

Not the freshest eats in the world, huh? Fortunately, there’s another recipe for fixing it – and it involves you. Educate people at your school by bringing ACE to your school for an assembly and starting an Action Team.

Rebecca is ACE’s Director of Education. She came to ACE in its inception in 2008. Rebecca develops ACE's science content, manages ACE’s online climate education resource, Our Climate Our Future, and ACE's teacher network and works with schools in the Reno-Tahoe area. Prior to ACE, she did paleoclimate research in the Arctic and Antarctica.