This is a post by Daisy Pistey-Lyhne, ACE’s Policy Liaison and Regional Managing Educator in Washington, D.C.

This weekend was an incredible journey for two ACE Youth Advisory Board members. Shreya Indukuri and Daniela Lapidous, juniors at the Harker Upper School in San Jose, California, traveled to our nation’s capitol to share their carbon-cutting success with thousands of people at Power Shift 2011, and hold a meeting to discuss energy-saving strategies with leaders at the White House. 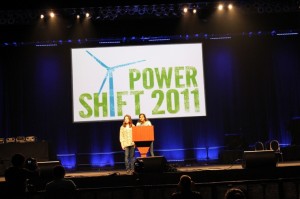 After speaking on the Power Shift main stage on Saturday night (to an excited crowd of more than 8,000 people), Shreya and Daniela met with the U.S. Chief Technology Officer, Aneesh Chopra, and the Acting Under Secretary of Energy, Arun Majumdar, to discuss how to scale their wildly successful carbon-cutting projects across the country.

Shreya and Daniela first shared their success with SmartPowerEd, and encouraged the White House to help schools across America reduce their energy use through simple and cost-effective measures.

School electricity bills account for the largest expense of most schools across the country. By reducing energy use, schools can redirect that money toward expenses like new books, new computers, or better teacher compensation. Especially in a time of school budget cuts, investments in energy efficiency are a great idea.

Officer Chopra and Under Secretary Majumdar were both very impressed with the work that these teens have done, and are interested in supporting further programs to expand this work to more schools across the country. 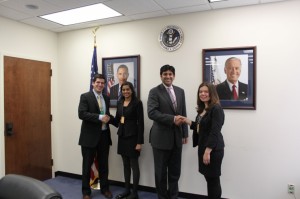 So, how did this all start? After seeing the ACE assembly in 2009, Shreya and Daniela became inspired to address Harker’s carbon footprint. Once they recognized the need to reduce school energy use, they led an effort to install smart sub-meters on Harker’s campus. Sub-meters allowed them to monitor energy usage in each individual building over the course of the day and identify energy anomalies – such as the air conditioner switching on in the gymnasium each night from 9pm-3am.

Through a combination of rescheduling equipment operations, minor energy retrofits, and raising awareness among students and faculty about energy waste, they were able to realize a 13% reduction in energy use on campus over two years.

They received a grant from ACE to cover some of the equipment costs, and they recouped their expenses in just 18 months. This investment has already resulted in thousands of dollars energy savings – a return on investment of 250% and the kind of cost savings that any school district could really get behind.

After realizing how easy it is to save energy, Shreya and Daniela went on to found their own non-profit organization, SmartPowerEd. Now they are helping other schools in Silicon Valley to implement similar energy-saving measures.

In two short years, these young ladies went from teens passively sitting in an assembly hall to powerful young leaders driving changes at the national level.

ACE is working with teens across the country to build support for student leadership on energy and climate issues. Who’s next? It could be you!

As technology has advanced, social media has become the number one way to stay connected and to retrieve information. However, fossil fuel corporations and other climate denying agencies are continuing to use social media as platforms to spread misinformation about climate change. From Facebook to Tik Tok, climate misinformation is becoming so polarizing that often people are confused on what the truth really is.

ACE supports a robust and energized Action Team Network nationwide that is dedicated to taking comprehensive action on the climate emergency. With more than 800,000 young advocates, our Action Team members have rallied together to plan a series of events on Earth Day nationwide. From protests to mountain climbing, our action teams got creative in celebrating Earth Day.

These six climate activists are tired of the inexcusable lack of action to preserve a habitable planet for all. Here they speak about how their identities impact their climate work and what it means to them to be a climate activists from the Asian and Pacific Islander community.