Friday the 13th is a great day to talk about slaying Energy Vampires and scaring off Phantom Energy Loss. Here are 13 facts that’ll save a few dollars and kilowatt hours:

2. Be afraid of the lights.
Ever notice that with all the lights turned off, your room still isn’t dark thanks to glowing clocks and device lights? While some use super-efficient LEDs and some power suckers don’t have a clock or lights, taking a look at everything that glows is a good start.

3. Don’t be fooled by cool.
Sure, you can feel a power brick or wall wart to get a sense if it’s a vampire (heat=power use), but the most reliable way is to plug it into an easy measurement device such as a Kill-a-Watt, The Energy Detective or the Belkin Energy Use Monitor (you can check out coupons here).

4. Their weakness is unplugging.
Whether it’s a big appliance or a small charger, there’s no way a plug out of the socket can drain power. So if you’re just taking care of one device, just unplug it when it’s not in use.

5. Sleep may be better than death.
Every computer is different, but if you’re walking away from your computer multiple times in a day, putting your computer in “sleep” mode may use less power than shutting it completely off, thanks to the power it takes to wake it back up every time.*.

6. Defeat a hive all at once.
If you have lots of devices you need to unplug in one spot, just plug them into a power strip and get in the habit of switching it off.

8. Don’t attract them with pretty pictures.
Unless you have a desktop with an old tube monitor (which are already energy vampires), skip the screensaver — the pictures that cover your screen when you’re inactive at your computer. Those were invented to keep those huge old monitors for getting a screen tattoo, but your laptop or flat (LCD) monitor doesn’t need them at all, and they keep your computer sucking serious power every time you step away.

9. They’re small, but powerful.
Energy vampires are typically only about 5% of your home’s energy use, but that adds up on your bill and nationwide. It’s higher for schools that tend to have larger amounts of older equipment.

10. They drain our dollars and haunt our atmosphere.
The Union of Concerned Scientists says, “This extra electricity costs consumers more than $5.8 billion annually and sends more than 87 billion pounds of heat-trapping carbon dioxide into the atmosphere each year.” *

11. They’re not immortal.
Powering down completely keeps electronics cool and keeps components from running when they’re not needed. So unless a device is specifically designed to stay on all the time (which still sucks), it’s likely to last longer when you shut it down.

12. Are you in love with a vampire? Make it less scary.
There are some things that suck a lot of power that need to stay in standby mode to give you all the benefits — like your DVR so it can record “Vampire Diaries” — look (and ask for) ones that meet Energy Star standards. 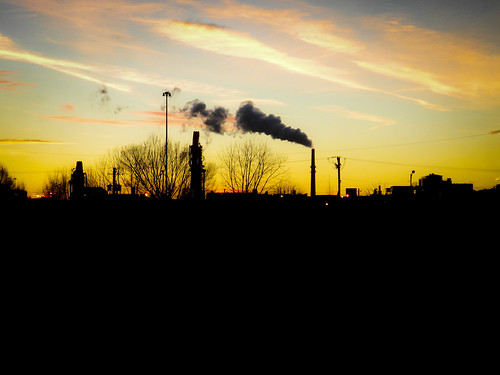 Sunset Over the Fisk Coal Fired Plant by vxla on Flickr

13. There’s nothing attractive about them.
Whether you’re Team Edward, Team Katherine, Team Eric, Team Tara, Team Spike, Team Violet… (Do we have enough vampire shows, movies and books? Seriously.), we can all agree that no one falls in love with the results of wasting energy.

If you liked this post, you might want to check out Daniella and Shreya’s tips on slaying energy vampires in school.